Celebrating the wonders of all things natural!

On a recent visit to the California Academy of Science, I was amazed by the animals, not only because they are exotic, rare and beautiful, but because they seemed to be watching us as much as we were gazing at them.

They seemed to be interested in us too, which is surprising to me as I’d never noticed how the animals interacted with the people staring at them through the glass before. Looking at us, they seemed to communicate and pay attention, maybe even feeling awe at the beautiful humans looking at them.

I first had the thought when this ancient-looking eel noticed me staring intently at it and started coming out of his hole in the rock to get a better look, or allow me to see him (her?) better. He (feels like a him) came all the way out of his hole, then went back in and stuck his head out again. 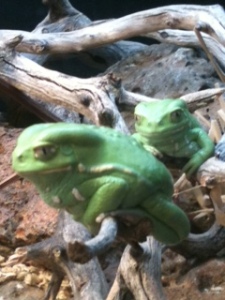 As did the fish:

The rattlesnake was more active than any I’ve ever encountered (thank God glass separated us!). As we approached its enclosure, he came toward the glass and waved his head around in front of us! Wow! Very exciting to see the way snakes move quickly and how they are able to sling their triangle-shaped heads around.

Just when I thought I might be imagining all of these animals communicating with me, I stepped between a man and a gila monster to dodge the crowd. “Excuse me,” I said to the man, wearing a hat and holding a cane. “I didn’t mean to step in front of you.”

He smiled at me. “He’s looking at you,” he told me, pointing toward the gila monster who had walked across his habitat and was moving his head back and forth in my direction.  Confirmation by the man with the white hair and sweet smile.

“I know! I’m like, ‘wow, scary!'” Smiling too, I walked on, eager to communicate with each one of the creatures, wanting to see them all (much to my teenage son’s chagrin!).

Tuning in reveals even more of nature’s awes! 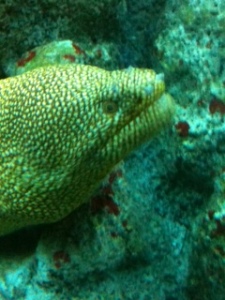